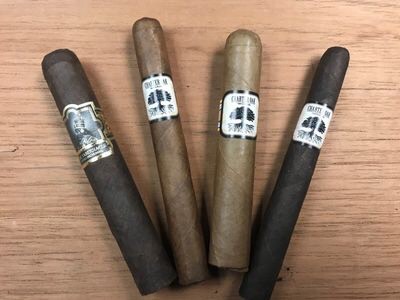 Cigar Train’s “Freight Train” Cigar of the Month Club is an opportunity for you to try out new or different  cigars every month.  Hand selected each month we try to feature a manufacturer or theme of cigars for our members.  Each month you will receive at least 3, sometimes, more cigars to try.  Each month a cigar manufacturer or theme is featured which is a perfect opportunity for your to venture out in your cigar experience!

How Does it Work?

Each member is billed automatically via credit card on the 15th of the month.  We will email all members and post on social media when the cigars are available.  We can also ship for an additional cost within Washington State. Join anytime, cancel anytime!

Tabacalera Palma’s emergence predates to the mid-19th century, when a Spaniard named José Manuel Blanco Lozada moves to the Dominican Republic and pursues the trade of tropical fruits and tobacco. His son José Arnaldo Blanco I, took the initiative to grow tobacco.

Jose Arnaldo I went on to have a son baptized as José Arnaldo II, who married Irene Dominguez, a hardworking woman that became active with him in the business. They both devoted all their efforts to the trade of cocoa beans, fruits, meats, and of course, tobacco. José Arnaldo Blanco II established Tabacalera Palma in 1925 and filed for industrial registration in 1936, becoming one of the first cigar manufacturers in the Dominican Republic. By 1960, ‘La Palma’ had grown to have around 200 full time rollers creating cigars for the local market.

Mr. Blanco II and Irene’s eighth child, José Arnaldo III, a member of the 3rd generation to bare that name, became part of the 4th generation in the family business. José Arnaldo Blanco III, affectionately known to all as “Jochy”, is the current owner.

In the midst of 1995, Jochy transferred the original Palma factory to a free trade zone he founded by the name of ‘La Palma’. Such facilities reside in the northern part of the country: Tamboril, located in the outskirts of Santiago, the second highest populated city of the Dominican Republic.

Nowadays Tabacalera Palma is a vibrant enterprise with a positive impact to the community. Not only does the company contribute with the direct employment of many citizens but also supporting charities like the Firemen Patronage, the Orphanage of Tamboril, several sports organizations, amongst others. The company employs more than 350 citizens on site, more than 70% of them being women, indirectly employing more than 1,500 with all of the operations.

Ever since Mr. Blanco assumed the role of CEO in Tabacalera Palma, the company has developed numerous private labels for some of the leading cigar companies in the world. Additionally, T.P. has developed and improved tobacco growing, harvesting, curing and processing techniques, ideal factors that increase quality.

Master blender Jochy Blanco is a fourth generation tobacco grower and manufacturer and his Tabacalera Palma Factory, where these cigars are made, was one of the first established cigar factories in the Dominican Republic back in 1936. La Galera 1936 Box Pressed cigars were released in 2016, but the planning for these cigars first started 7 years prior.

When Jochy decided he was going to create a premium line of cigars of his own, he took some of the finest tobaccos he had grown on his La Canela farms and set them aside to age for 7 years. These were Piloto Cubano and Criollo 98 leaves that are used in the filler and another Criollo 98 as the binder. To finish the blend off he applied a smooth Ecuador Habano wrapper on top. The blend is medium to full in body, with a ton of great flavor. Notes of cocoa, pepper, dried fruit, espresso, and earth make for a satisfying complexity.

If you’re the type that pays attention to the presentation, La Galera Habano does it incredibly well – from the band artwork to the box – it’s a beautiful cigar. And the tobaccos used are just as good. La Galera only uses proprietary, aged tobaccos grown on Jochy’s farms in the Cibao Valley, with the only exception for wrapper leaf. In this case, an Ecuador Habano wrapper is applied atop a Dominican Corojo binder and Piloto Cubano, Criollo 98, and Pelo de Oro long-fillers. It falls in the medium-bodied spectrum but is full of flavor, with heavy notes of pepper, some earth, wood, and a touch of fruity sweetness.

La Galera Maduro comes adorned with a dark, Mexican San Andres wrapper over a Dominican Piloto Cubano binder and Dominican long-filers, and sits comfortably in the medium-bodied range. Well-balanced with rich chocolate, cedar and spicy flavors, it finishes with a nice creamy sweetness on the palate.

La Galera Connecticut was created after Jochy had made Connecticut’s blends for many other brands and decided he wanted more out a Connecticut. It employs an Ecuador Connecticut wrapper atop a Dominican Piloto Cubano binder and three different varieties of Dominican long-fillers all grown in the Cibao Valley. It’s mellow to medium in body, but has as great amount of rich flavors. Toasted almonds, cocoa, espresso, and some floral notes round out this satisfying Connecticut.